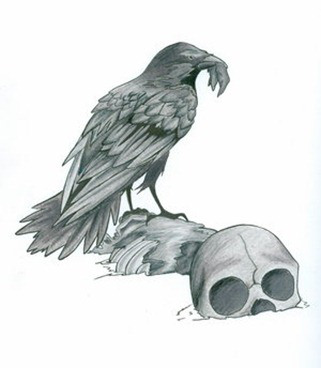 Samhain has arrived and the Wheel of the Year has turned once more.

As I was searching the web to prepare for our Samhain celebration, I ran across this great post at Salem’s Moon – Magic & More. So, I thought I would share it with you instead of recreating the wheel (pun intended). There are also some other interesting Samhain posts at Salem’s Moon if you are interested. But let’s talk Crow …

The CROW as the MESSENGER OF DEATH and MYTHOLOGICAL SYMBOLISM

At the Samhain/Halloween time of year, we often see crows on decorations and symbols. They have often been associated with being the “messenger” between the worlds of the living and the dead. But, they are also steeped in much more mysticism.

Keeper of the Sacred Law —

Crows are the keepers of the Sacred Law and to have a Crow totem is very powerful. Personal Integrity are your watchwords and your guide in Life. If you have a Crow totem, your prime path is to be mindful of your opinions and actions. You must be willing to walk your talk, to speak your truth and to know your life’s mission.

Crow is a omen of Change. Crow lives in the void and has no sense of time, therefore, it sees past, present and future simultaneously.Crow merges both light and dark, both inner and outer.

It is the totem of the Great Spirit and must be respected as such. They are symbols of creation and spiritual strength. Look for opportunities to create and manifest the magic of life. Crows are messengers calling to us about the creation and magic that is alive in the world today and available to us.

Symbolism and Superstitions of the Old World —

Charles Dickens memorably described the crow as “that sedate and clerical bird” in The Mystery of Edwin Drood. He named it a rook, a common confusion.

In Irish mythology, crows are associated with Morrigan, the goddess of war and death. The god Bran the Blessed whose names means ‘crow’ or ‘raven’ is associated with corvids and death. His severed head is said to be buried under the Tower of London facing toward France, a possible origin for the keeping of ravens in the Tower, which are said to protect the fortunes of Britain. In Cornish folklore crows and particularly magpies are again associated with death and the ‘otherworld’, and must always be greeted with respect. The origin of ‘counting crows’ as augury is British; however the British versions rather count magpies – their black and white pied colouring reflecting the realms of both the living and the dead.

The Celts believed that Crow was an omen of death and conflict. She was associated with death transitions. Another belief was that the birds were faeries who shape-shifted to cause troubles. Magickal qualities included bringing knowledge, shape-shifting, eloquence, prophecy, boldness, skill, knowledge, cunning, trickery and thievery.

In the Middle Ages, people believed that sorcerers and witches used the symbol of Crow’s foot to cast death spells.

In most of England, seeing a solitary crow meant anger, but in Northamptonshire, it meant ill fortune. Crow, cawing in a hoarse voice, meant bad weather. A death omen was a crow cawing thrice as it flew over a house. The Irish believed that Crow flocking in trees, but not nesting were souls from Purgatory. Finding a dead crow was a sign of good fortune. Russians believed that witches took the shape of Crow.

Crows have a great mythology about them. This can reflect past-life connections to those times and cultures but it also reflects some of the archetypal forces that it can connect with us. As with many animals, crows also have been known to predict tornadoes, rain, and other changes in weather by the way they fly. Working with crows can help you see how the winds are going to blow into your life and how to adjust your own life flights. Crows have long been considered magical and it is said that finding a dead crow is a sign of good luck.

Wherever crows are, there is magic. They are symbols of creation and spiritual strength. They remind us to look for opportunities to creat and manifest the magic of life. They are messengers calling to us about the creation and magic that is alive within our world everyday and available to us.

The crow as a totem animal is the secret magic of creation calling.

This site is no longer being updated. The information remains for educational purposes only.