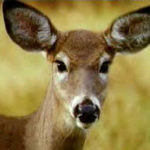 Well, my usual autumn case of the crud hit a couple weeks ago and left me feelin’ pretty puney and voiceless for almost a week. I spent recovery time curled up with my “blankie” and lots of slippery elm tea with honey, lemon and cayenne. Then it took me over a week to get caught back up in the office. It stunk as I couldn’t even return phone calls. So, the following story got delayed a a while.

Back in early September, I had a very interesting experience with a member of our local deer herd. If you’ve followed us before, you’ll know we live in the forest and share our space with several herd of “Sidhe deer”.

It was just after Labor Day here in the US when I was awaken from my sleep by a horrible smell. I noticed a slight odor when I went to bed, but just passed it off as something fleeting. I have a VERY sensitive sense of smell. Well, about 2 a.m. I came out of a deep sleep to a horrible smell of decomposition near my face. Not only could I smell it but I could taste it!

I looked around the room and under the bed. My cat has a tendency to bring me “goodies” and sometimes lets them go in the bedroom. I thought maybe she had left a mouse somewhere under the bed. Nothing under the bed or anywhere I could find in the room … I tried to go back to sleep thinking maybe it was one of my weird dreams. But I couldn’t go back to sleep for the smell. So I grabbed a pile of meditation pillows and a blanket and moved to the floor in my office to try to get some sleep.

In the morning, I tore the room apart including the bed, lifting up the mattress and box spring to be sure I wasn’t missing anything. Nobody could smell it but me! I went around the outside of the house and sniffed near the vents to see if something was dead under there. Nothing. So, then I was sure something had died between the walls. But someone else would surely smell it. The smell lightened during the day so I thought all was good until I headed off to bed that night. Before I got in, the smell hit me hard and I took the air mattress out to the living room (I was tired and getting cranky).

The next night, Gary caught a fleeting odor as he searched the room, but nothing like what I was experiencing. We decided I had a visitor. I smudged, and smudged, and smudged and asked the spirit to leave. It helped some. The sage smelled better, but the decomp smell was still there. So, another night on the air mattress. The next morning, I settled in to a journey to see what was up.

My Guides took me to the spirit of a female deer who had died deep within our forest. For some reason (neither she nor my Guides would explain) she was stuck in the decaying body and her spirit had not transitioned. She informed me that she was coming to me for help. I had been chosen for couple reasons. First, she told me that she found me, the Druid in our forest, and also that I was a part of the Sidhe (Faerie) clan and part of her herd. And she explained, because of the deep care and concern I had for a yearling stag in our herd, she knew I was the one to help her. This young stag had something stuck to his foot causing pain and issues walking.  I had been working to help him on the energetic level and was trying to find help on the physical level as well.

I commented about the fact that she appeared smelling so awful and she apologized, but said she wasn’t happy about being stuck in the smelly, decomposing physical form either. So, with the help of my Guides, we released her spirit and allowed it to soar and join the spirit herd. Once this was complete, I thanked my Guides for their help and returned from the Otherworld.

Once the journey was completed, the odor in the room vanished and I was able to get a good night’s sleep in MY BED.

I have done psychopomp work before and helped human spirits and pets cross over, but this was my first time be invited to work with a wild animal spirit. It was amazing how easy it was as the wild ones don’t have the attachments and baggage the we have as humans or that our pets have. She was well ready to go and join her herd, and as soon as we separated the tangled chakras her spirit was released.

The next day, as I sat at my desk, I noticed our little stag coming to the water fountain. To my surprise, the article that had been stuck around his foot for well over a month was GONE. He was still limping, but that was due to the swelling in his leg. I thanked the deer spirit for her assistance. It was an unexpected, but welcomed, energy exchange for the work done.

Want to know more about Deer Medicine? Check out our Nature Wise Blog.

Just another day in the life of a shaman.

Until next time —
Mitakuye Oyasin (A Lakota prayer reminding us we are all related),
Debbie