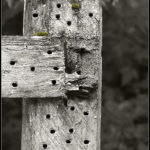 A fence : A story with a great moral —

There once was a young boy with a very bad temper. The boy’s father wanted to teach him a lesson, so he gave him a bag of nails and told him that every time he lost his temper he must hammer a nail into their wooden fence.

On the first day of this lesson, the little boy had driven 37 nails into the fence. He was really mad!

Over the course of the next few weeks, the little boy began to control his temper, so the number of nails that were hammered into the fence dramatically decreased.

It wasn’t long before the little boy discovered it was easier to hold his temper than to drive those nails into the fence.

Then, the day finally came when the little boy didn’t lose his temper even once, and he became so proud of himself, he couldn’t wait to tell his father.

Pleased, his father suggested that he now pull out one nail for each day that he could hold his temper.

Several weeks went by and the day finally came when the young boy was able to tell his father that all the nails were gone.
Very gently, the father took his son by the hand and led him to the fence.

“You have done very well, my son,” he smiled, “but look at the holes in the fence. The fence will never be the same.”

The little boy listened carefully as his father continued to speak. “When you say things in anger, they leave permanent scars just like these. And no matter how many times you say you’re sorry, the wounds will still be there.

There are a couple of things to be learned from this story — it takes less energy to “hold your temper” than to express it and to be careful with YOUR words.

So, let’s talk a bit about anger. First, what is anger? The Merriam-Webster 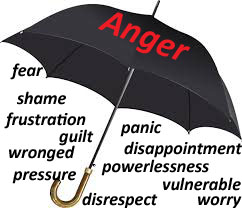 Dictionary defines anger as “a strong feeling of displeasure and usually of antagonism”. That seems pretty vague if you ask me. I see anger as a very complex emotion or even what some call a “secondary emotion”. It’s pretty much like an umbrella. What you see is what we call anger, but underneath the umbrella is a whole host of other emotions that we cover up because we either have a hard time defining them or we fear them. We resort to anger in order to protect ourselves from or cover up these vulnerable feelings. We almost always feel some other feeling before we get angry. We might feel afraid, attacked, offended, disrespected, forced, trapped, or pressured. But these feelings make us feel vulnerable and anger makes us feel more in control and “justified” when we feel wronged.

Now I’m not saying that anger is always a bad thing. Society tells us that anger is “bad”. I don’t believe this. I see anger as an emotion of our shadow self, a natural part of our self and our experience as a human being. No matter who you are, you will, at some time in your life feel anger. It’s when our anger takes on an energy of its own that it becomes an issue. Sometimes a feeling that comes under the anger umbrella can motivate us to take positive action, like leaving a job or relationship that no longer serve us. Most often though, anger comes out cross ways and does damage to those around us, just like the little boy’s fence. And it can take many years to fill in those holes in the fence and some can never be repaired.

Not only does anger hurt those who are the recipient of anger, but it hurts the person who is angry. Journeying with clients over the years, we have come across anger in many forms, from heavy weights being carried in the energy body to violent storm patterns within their energy body and/or chakras. These patterns create imbalance for us that can result in not only emotional dis-ease, but physical dis-ease as well. As a shaman, we believe all physical dis-ease begins in the energy body. One can only begin to image the damage a violent storm in the energy body can have. It creates all things from heart attacks to cancer and more. So energetically it is important for us to begin to understand our anger and the underlying emotions.

Next time anger rears it’s head, stop and ask yourself what you are really feeling. What was the very first emotion you felt before you identified anger? You know the old saying about counting to 10 before speaking when you feel angry, well this is a time to look at those emotions under the anger. Sometimes you may be able to identify it right away and deal with your true feeling and not put any nails in the fence. Somedays you’ll just hammer away, and that’s okay too. You’ll just have to go back later and remove them and look for some putty to fill the holes.

If you can’t determine the underlying feelings right away, try to spend some time journeying or in meditation later to find them. A great visualization is to see your anger like a large stone, big enough that it takes a lot of energy to move it. Then push it aside and look at what is underneath. These are your true emotions that the anger is covering. Take each out of the hole and lovingly and honestly address it and see what you can do to bring it into balance within your physical, emotional and spiritual bodies.

I invite you to look under your anger umbrella and become familiar with all the emotions underneath.

Until next time —
Mitakuye Oyasin (A Lakota prayer reminding us we are all related),
Debbie

1 thought on “Anger and A Fence Story”