Well, life is back functioning normally (what ever that might be) here at Shaman’s Grove. Our first winter has proving to be exciting so far. As you may have noticed, we haven’t made any new posts for a while. That because we have been “experiencing winter.” Now, we chose this area of Oregon because like we say in Grants Pass… “It’s the climate”. That’s what brings many people to this area. It’s generally mild – mild summers with a few hot days and mild winters. We get the occasional snow flurries, but the snow is usually gone by noon. We had a few days of waking up to a dusting of snow in The Grove and it was quite beautiful.

We had been in town when it started to snow. So we finished our lunch and business and headed back to The Grove. Our little car spun out in our long drive once, but Gary was able to maneuver through the thick slush and get us to the garage. And the snow continued to come down… thick, sloppy, heavy snow… about 6 inches worth! Now I know you folks in snow country are laughing at our whining, but we don’t own a snow shovel! We came here because we didn’t want to shovel the stuff!

I was coming home to send our holiday greeting and pay some bills. Our power was flickering and browning out, so I didn’t turn on the computer just as a precaution. We regrouped dinner plans and settled for a bowl of soup. As soon as we sat down to eat, out went the power for good or at least the next two days. Fortunately we were prepared for this possibility. The neighbor above us had warned us about the impossibility of our driveway when there was any snow accumulation. And, when we lived in MI it was nothing to be without power for 8 days at a time, so we knew how to do this. We had water stocked up for drinking and household use (we have a well – no electricity – no water), lots of home canned food, and plenty of firewood. We were happy we put in the fireplace insert so we had heat, and the camp stove found a semi-permanent place in the kitchen. With flashlights, camp lights, candles and extra blankets we settled in for the duration. Ziplock bags full of snow kept the refrigerator cold and the freezers froze. It was just camping with our own beds! There were lots of hoots and hollers on Saturday night when the lights came back on though. A shower never felt so good! 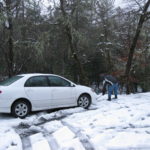 We did get out with our son, Brian’s, car on Sunday to pick up some salt, a come along (got the car stuck) and a sled to bring wood down from the wood shed. Then off to Dutch Brothers to use the Wi-Fi and get the bills paid. Another trip to Mc Donalds and Starbucks for wi-fi followed to check emails. Eight days later we got internet back!

Fortunately, no big damage here – a few of trees down in the forest and around the house, and lots of water run off.  There are lots more and many branches that have been knocked down. That’s why we didn’t have power – trees down on the roads and the power lines. So, we are spending nice days cutting up the downed trees and getting them ready for next winter’s firewood. Of course, we did have to go buy the chain saw that we hadn’t gotten yet. Fortunately we had decided which one we wanted, so a quick trip to Medford was in order for a chain saw and Starbucks once we could get out of the driveway.

So, hopefully the remainder of the winter will be “normal” and the snow will melt as quickly as it comes down. We still refused to buy a snow shovel☺

Until next time… and hopefully it won’t be so long…