It’s St. Patrick’s Day and it’s definitely Irish Pride Day here in the US today. And we are certainly proud Irish (you don’t see the other ethnic groups celebrating their heritage with such a hullabaloo.)

We pagans or non-Christians are well aware of the struggles between those who follow a Christian path and those of us who follow the “old religions”. So, here’s both sides of the coin with St. Patrick.

To make a long story short, Patrick, a Catholic Bishop, was sent to Ireland to help convert the people to Christianity. He was a devote man who held a firm belief in HIS God and HIS church. This man was passionate about what he was doing as his life’s work. There are many different stories about the works of Patrick during his life, and stories of the miracles he performed (for more, check the internet). After his death he was given the status of saint-hood.

Now, one of the rumors is St. Patrick drove the snakes from Ireland and this is where the issue with the pagan community comes up. Legend has it that St. Patrick stood on a hilltop and waved his staff to herd all the snakes into the sea, expelling them from the Emerald Isle forever. And low and behold, there hasn’t been a snake seen in Ireland since 461 AD (expect for the odd household pet and zoo creature). 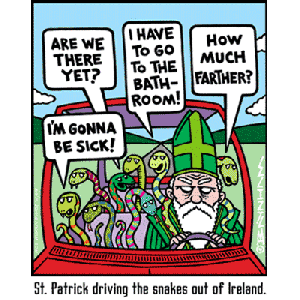 Okay, this is a fun legend, so what’s the deal? Now realize, there is no record, fossil or otherwise, that snakes have lived in Ireland since the last ice age ended over 10,000 years ago. But, in religious lore the snake (or serpent) represented evil, godlessness and the devil’s will (e.g., offering the apple to Adam). So from a Christian point of view, Patrick driving the “snakes” out of Ireland is driving away evil. Good job.

Now, on the other side of the coin… 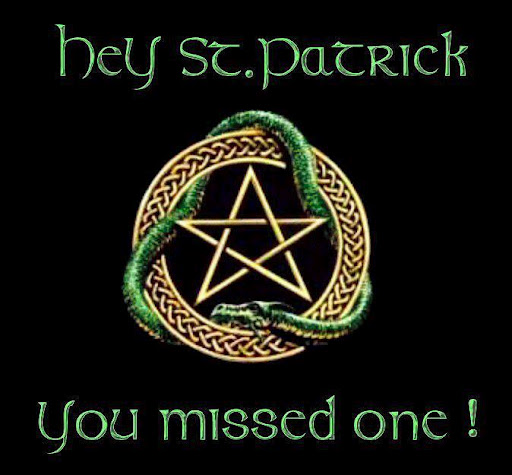 To the pagans, the serpent or snake is a symbol of wisdom, strength, fertility and transformation. Because the Christians viewed the old ways as evil and Patrick was sent to drive out the old ways, the Pagans view the serpents Patrick eradicated as a metaphor for the early Pagan faiths of Ireland…THEIR religion. In fact, he did such a good job of it that he began the conversion of the entire country to the new religious beliefs, thus paving the way for the elimination of the old religions for many hundreds of years. Not so good.

Of course, there is always more to the stories that we will never know. The written stories that have been passed down were written by the Christian monks and we know everyone writes down what they see through their own filters. The Druids didn’t keep written histories. Their stories were passed down through the Bards from generation to generation, and we’ve all played that game where we see how a story changes after a couple of tellings.

So, today when everyone’s Irish for the day, raise a pint and celebrate. Whether you raise the pint to being Irish, to St. Patrick, to wake your ancestors, or just raise a pint, you now know… “The rest of the story.”

Enjoy and until next time…
Mitakuye Oyasin (A Lakota prayer reminding us we are all related),
Debbie