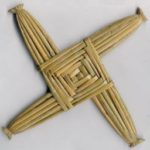 February 1st marks the beginning of Imbolc (Imbolg or Oimelc as it is known to the Celts, Candlemas to the Christians). This is the first of four fire festivals celebrated by my Celtic ancestors. But unlike the other fire ceremonies, Imbolc’s emphasis is on light, rather than heat. Although the days began to get longer following the Winter Solstice, now the light and longer days begin to become more noticable. This is the time of the first stirrings of Spring in the womb of Mother Earth. We begin to see the first of the crocuses and daffodils peeking through the snow, the spring lambs are being born, we can trade the heavy winter parkas for lighter coats, spring rains bring green grass and Old Man Winter begins his slow retreat.

Imbolc, specifically among the Celts, is associated closely with the Celtic goddess Brigid, who in later times became revered as a Christian saint, St. Brighid. Brighid was considered, Goddess or Saint of the fire, forge and hearth, she is also protector of poetry, healing, childbirth, and inspiration.

Personally I love the stories that surround the Gods and Goddesses and the cycles of Nature. In a Scottish story Brighid is taken captive by Beira, the Queen of Winter. Before the fire of the sun can warm the earth again Brighid has to be freed. So a spell is cast borrowing three days from the heat of August. As Brighid walks free light fills the earth and the land turns green again. There are many versions to this story, as with all oral traditions, many of which you can find online.

Another great group of stories about Brighid/St. Brighid are about Brighid’s mantle. St. Brighid is said to have asked the King of Leinster for land to build an abbey at Kildare. It was agreed that she could have as much land as she could cover with her cloak. Needless to say the cloak expanded to cover all the land she needed for her foundation. In the Hebrides there are stories told of St. Brighid wrapping the new born Christ child in her cloak as she acted as Mary’s midwife in Bethlehem.

There is a belief that Brighid lends her healing powers to any piece of cloth that is left out at Imbolc. This piece of cloth is known as Brighid’s Mantle and it is said that Brighid blesses the cloth as she passes by the house. With each passing year and Imbolc blessing the mantle gains healing power. Brighid’s Mantle was at one time part of the Irish midwife’s equipment and would be placed over expectant mothers and birthing animals to ensure a safe birth. It would also be wrapped around any part of the body that ailed to aid healing.

The weather on Imbolc/Candlemas was often seen as an omen (where Ground Hog’s Day comes from?). As the old saying has it:

SOME WAYS TO CELEBRATE IMBOLC:

A Welcome Prayer To Brighid
Goddess/Saint of Healing, Poetry and Smithcraft
We welcome you today
We ask you keep us safe and keep us warm,
And extend your blessing over our home.

Blessed Imbolc to all.

Mitakuye Oyasin (A Lakota prayer reminding us we are all related),
Debbie