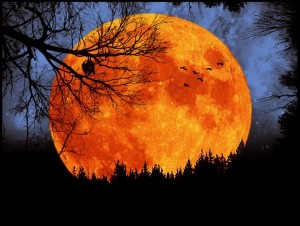 September 19 brings us the 2013 “Harvest Moon” aka Wine Moon, Corn Moon and Singing Moon (to name but a few). The Harvest Moon is the full moon closest to the Fall Equinox.

I always remember a sort of awe and mystery about the Harvest Moon. It has such a presence in the sky – a super large bright orange orb shining in the night sky. But is it really bigger, brighter or more colorful? Well, according to the website Earthsky.org, it’s just an ordinary full moon.

The orange color of a moon near the horizon is a true physical effect. It stems from the fact that – when you look toward the horizon – you are looking through a greater thickness of Earth’s atmosphere than when you gaze up and overhead. The atmosphere scatters blue light – that’s why the sky looks blue. The greater thickness of atmosphere in the direction of a horizon scatters blue light most effectively, but it lets red light pass through to your eyes. So a moon near the horizon takes on a yellow or orange or reddish hue.

The bigger-than-usual size of a moon seen near the horizon is something else entirely. It’s a trick that your eyes are playing – an illusion – called the Moon Illusion.

Harvest Moon time is the time of year when our focus is on harvesting what we’ve been growing and/or working on all year. The last of the crops are being gathered from the fields and stored for the winter. There’s a chill in the air, and the Mother Earth is winding down and preparing for winter.

This moon is a cycle of hearth and home. For those of us who are not farmers, it’s a good time to spend begin preparing your space (home and work) for the upcoming chilly months. Use this time to clear out clutter before you have to spend the long winter days inside. Let your thoughts turn to what you need to preserve to carry your hearth and home through the dark months to come.  If you have more than you need it’s a good time to donate it for those around you who need food, blankets and clothing to safely carry them through the winter.

Harvest is also a time for thanksgiving and appreciation for the abundance in your life.  This moon cycle is a good time to go inward to harvest what you planted last spring — to look at your journey over this past year and see where you would like to go… and the roads you can choose to get there.

It’s also a good time to clean out the emotional/mental/spiritual clutter you don’t need to carry into winter. In some cultures, this is a time to release any sorrows or regrets you may be carrying. Villagers would bring small representations of their regrets in the form of “corn dollies” to be thrown in the communal balefires lit to burn away the waste and unneeded husks of the recent harvest. If you’re not up to making “corn dollies” (they are a project), simply write any sorrows or regrets on a dried corn husk (in the Hispanic food section of your grocery) and toss it into the fire.

We invite you to prepare your harvest and spend some time outside chatting with the beautiful Harvest Moon.

“So shine on, shine on harvest moon,
For me and my gal.” Shine On Harvest Moon By Nora Bayes and Jack Norworth (1903)

Mitakuye Oyasin (A Lakota prayer reminding us we are all related),
Debbie