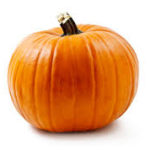 It’s All Hollows Eve today and a newsletter about “Scary Halloween Herbs” got me musing about pumpkins and Jack-O-Lanterns.

In my Celtic tradition, Samhain (Halloween) begins tomorrow night (10/31) at sundown. Samhain is one of the two “spirit-nights” each year, the other being Beltane (May 1). It is a magical time when the mundane laws of time and space are temporarily suspended, and the Thin Veil between the worlds is lifted. According to my Celtic Ancestors, this is the time the souls of people who had died that year make their journey to the Otherworld. During this thinning of the veil, spirits are said to roam the earth freely, and communicating with ancestors and departed loved ones is easier at this time. It’s also told that the Fairy Folk became very active, pulling pranks on unsuspecting humans. People use to dress in white (like ghosts), wear disguises made of straw, or dress as the opposite gender in order to fool the spirits and traveling after dark was was not advised. The holiday’s bonfires and glowing turnips (yes, turnips) helped the dead on their journey while protecting the living.

So, let’s talk about the Halloween pumpkin … Pumpkins carved as jack-o’-lanterns would not have been part of traditional Halloween festivals in Celtic Europe. Instead, the Europeans hollowed out large turnips, carved faces into them and placed them in windows to ward off any evil spirits. When the colonists arrived in the New World, they found Native Americans growing pumpkins and adapted them for their Halloween rituals.

The Legend of the Jack-O-Lantern 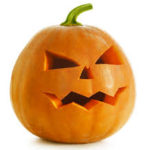 People have been making jack-o’-lanterns at Halloween for centuries. The practice originated from an Irish myth about a man nicknamed “StingyJack”.

“Like most folklore, the history of the jack-o’-lantern varies a little bit depending on who’s telling the story. But all stories involve a clever drunkard that pulls one over on the devil. Legend has it, in 18th-century Ireland, a foul-mouthed drunk and disreputable miser named Stingy Jack asked the devil to go have a drink with him. The devil obliged and when the bill came, there was that awkward moment that we’re all so familiar with. Jack expected the devil to take care of things, and the devil thought Jack should pony up. Seeing as how Jack had no money anyway, he convinced the devil to turn himself into a six pence coin to pay the bill. The devil fell for it and Jack skipped on the bill and kept the devil at bay by sliding the coin into his pocket to lay at rest beside a silver cross.

The devil was stuck in Jack’s pocket, trapped by the cross, but Jack decided to be a good egg and let him out, providing that the devil wouldn’t come after Jack for a period of one to 10 years, depending on who you ask. The devil had no choice but to agree and once the coin was removed, he turned himself back into the devil and went on his not-so-merry way. At the end of the agreed upon timeframe, the devil found Jack for a little payback. Somehow, Jack convinced him to climb a tree in search of an apple for Jack before they set off for hell. The horned one once again obliged, only to see Jack carve a cross into the tree trunk, and leaving the beast stranded again.

Jack must have felt bad, because he agreed to let the devil down if he promised to never claim his soul for Hell. The devil was caught between a rock and hard place once again, so he agreed. When Jack died, St. Peter rejected him at the pearly gates because of his suspect credentials. The devil wouldn’t and couldn’t let Jack in to hell, per their agreement at the tree. In the end, Jack was given a lump of burning coal by the devil to light his way through purgatory. Jack carried the coal inside a hollowed out turnip.

Irish families told the tale and began to put carved out turnips in their windows to prevent Stingy Jack and other ghouls from entering the home. Some had scary faces carved into them to frighten away any comers. Once the tradition hit the United States, Irish immigrants soon realized that the pumpkin, native to the states, was an ideal fruit for carving. That’s why you see jack-o’-lanterns on porches around Halloween.” From Why do people carve Halloween pumpkins?by Emilie Sennebogen

So, we all know that pumpkins taste and smell good – just look at the pumpkin candles, pumpkin latte’s, pumpkin muffins and just about “pumpkin everything” available today. I even make a mean pumpkin chai smoothie (goat’s milk kefir, pumpkin puree, chai spice, stevia and ice). But do you know the mystical/magical properties of the pumpkin?

Pumpkins can be used for protection, divination, banishing, and prosperity. Pumpkins and pumpkin seeds represent fertility, abundance, wealth, love, prosperity, good luck, and can attract money. They can also be used for healing, honoring the Moon, and Divination/Contacting the Spirit World.

For protection, carving ghoulish faces into pumpkins and placing them at your doorstep is said to help protect your home from wandering, harmful spirits this time of year. As you carve your pumpkin this year, this blessing can add your magical intention –

“May the light of this lantern frighten away all evil spirits who whish to do as harm and light the way for all good spirits and ancestors who wish to visit us this night.”

Pumpkins as a symbol of prosperity and can be placed on the altar, hearth, and doorstep to bring prosperity into the home and to those who live in it. Keeping a pumpkin in your divination space is said to provide extra insight in your reading.

My friend Sarah, herself a Wiccan High Priestess, learned this spell as a child from her grandmother who is a powerful kitchen witch in the New England tradition. I have learned from various sources that this particular spell was in common use as early as the 1920’s and quite possibly before. This ritual confers a double blessing since it acts as a spiritual cleansing in addition to attracting wealth and prosperity to the individual that performs it.

Sit in a place where you can meditate quickly for a few minutes. Open your bag of pumpkin seeds and count out 9 seeds. Eat the first seed. You may choose to break the seed open with your teeth and eat the soft inner seed, personally I like to eat the salty hard shell as well. Slowly chew the first seed and wash it down with a drink of cool water. Repeat the process until you consume all nine seeds. After you swallow the last seed say to yourself aloud or silently may the seeds of this holy gourd cleanse me of all negativity and fill my life with wealth and blessings. You will be surprised at how effective something so simple can be! I have heard of people winning jackpots at casinos and encounter long lost friends after performing this easy ritual.