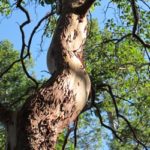 “Magnificent, dramatic, exciting, mystical, inspiring, magical, sensual … these are some of the words people use to describe the Madrone Tree, a favorite of the hardwood trees of the Pacific Northwest.”

This introduction to the Madrone Tree from Arbutusarts.com gives a perfect segway to the magnificent Madrone. We are blessed here at Shaman’s Grove with many madrone trees among the Oak, Firs and Pines. While I love all the trees here at The Grove, I am always awestruck by the shiny and peeling bark and twists and turns of the madrones.

The Madrone Tree (Arbutus menziesii) gets its name from the Spanish word madroño (which means strawberry tree…the early Spanish explorers named it after the similarities to a Mediterranean variety). They named it strawberry tree because of the plentiful bright orange-red berries, about the size of a small wild strawberry, that form in the fall.

The madrone is a broadleaf evergreen tree, the only deciduous tree that does not lose its leaves in winter. Madrone trees love the sun — they will twist and turn to find it if a competing tree tries to outgrow it. This twisting and bending a big part of the madrone’s charm. If blown over in a storm, they will still grow as long as the roots are attached. It will grow new branches facing the sun. In the early spring it abounds with white blossoms and during the summer months. 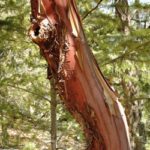 It sheds it’s reddish-brown skin and underneath the younger yellowish-green wood will turn a deep mahogany red during the winter months. Older trees do not peel all the way down to the ground. The bark stays and gives the madrone it’s shredded look. In the forest it is more resistant to fire than surrounding trees and resprouts quickly, acting as a nurse tree during forest regeneration.

Aboriginal people revere the Madrone. In Plants of the Pacific Northwest Coast, Pojar and MacKinnon relate two stories from native lore, told by the Straits Salish:

“Pitch used to go fishing before the sun rose, and then return to the shade before it became strong. One day he was late and had just reached the beach when he melted. Other people rushed to share him. Douglas Fir arrived first and secured most of the pitch. Grand Fir obtained only a little; and by the time Arbutus arrived there was none left. Therefore, Arbutus has no pitch to this day.”

“Chief Phillip Paul of the Saanich tells how Arbutus was the tree used by the survivors of the Great Flood (a tradition common to almost all Northwest Coast peoples) to anchor their canoe to the top of Mount Newton. To this day, the Saanich people do not burn Arbutus in their stoves, because of the important service this tree provided long ago.”

Poet Richard Olafson shares another Native legend, writing, “The tree’s webbed roots hold the splintered earth together.” If the Madrone should disappear, the myth warns-whether from fungal infection, habitat loss or some other cause, manmade or otherwise, the planet would fly apart and be utterly destroyed.

Herbal uses of arbutus include making an infusion of the bark and leaves to
treat bladder infections, stomach aches, or cramps. Fresh leaves are chewed to treat colds and sore throats. An infusion of the bark has been used as and astringent and to soften skin and enhance its luster. Fresh leaves were applied to burns, while dried ones were smoked as tobacco. The berries were also made into cider.

The sacred Madrone symbolizes knowledge. Madrone represents protection and safety. It is a tree of depth and integrity. It’s element is Fire and is ruled by the planet Mars. Magically, Modrone is used for making wands for protection and removing negative energies. It’s shed bark can be used for written petitions, prayers & spells.

There are many lessons that can be learned from Madrone, like bending to reach for what we want and/or need, shedding layers and growing in new directions when we are down. Madrone’s message is “The energy surrounding me is powerful. Be still and attune to me, I can help you decipher the meaning of it all.”

I invite you to sit with a Madrone if you live in the Pacific Northwest. If not, feel free to visit one of the Madrone here at Shaman’s Grove or find one that calls you in your journey or meditation. Spend some time and see what message Madrone has for you.